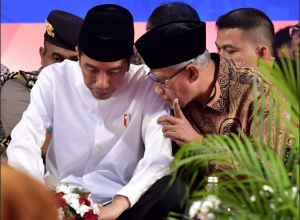 President Jokowi has a conversation with Chairman of Muhammadiyah when attending the Commemoration of the 100th Anniversary of Muallimin-Muallimaat Islamic School, at Yogyakarta, Thursday (6/12). (Photo: Presidential Secretariat)

President Joko Jokowi Widodo instructed his minister and related stakeholders to collaborate in the construction of a new building of the Muhammadiyah Mu’allimin Islamic School, Yogyakarta, which will begin next week.

I have ordered Minister of State-Owned Enterprises (BUMN) to immediately begin the construction, said President Jokowi while attending the commemoration of the 100th Anniversary of the Mu’allimin-Mu’allimaat Muhammadiyah Islamic School, Yogyakarta, Thursday (6/12).

The President explained that he takes an interest in educational facilities owned by the Islamic organization Muhammadiyah because it has produced many prominent figures in the country.

I saw in this book that in 1929, the building here was already built with a magnificent design. Later in 1951 and 2008, it was repaired with an even better design. I believe the new building will be more impressive, the President said.

On the occasion, the President also requested Muhammadiyah members to continue to maintain Indonesias unity and harmony because it is our nations greatest asset.

I invite everyone to continue to maintain the Islamic solidarity and national solidarity for the sake of the unity of Indonesia, the President concluded.