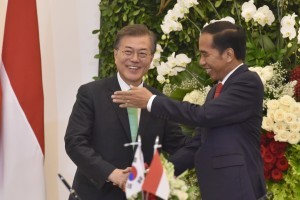 “Some of the issues discussed include an agreement to enhance a special strategic partnership between the two countries with the sharpening of industrialization acceleration in Indonesia,” President Jokowi said in a joint statement to South Korean President Moon Jae-In at the Bogor Presidential Palace, West Java, Thursday (9/11) evening.

According to the President, both countries have agreed to increase South Korea’s investment almost doubled in 2017. The data shows, in 2015 the total value of South Korean investment in Indonesia reached USD1.21 billion. Meanwhile, the trading volume increased by 19.3 percent in 2017, according to President Jokowi, it will continue to be increased.

The creative industry cooperation discussed during President Jokowi’s visit to South Korea in 2016, according to the President, has also been followed up by the opening of Korean Creative Content Agency in Jakarta in October 2016.

On that occasion, in particular President Jokowi expressed his appreciation Indonesian workers, especially those working in the fishery sector.

Regarding the developments on the Korean Peninsula, President Jokowi stressed that Indonesia is urging North Korea to comply with the UN Security Council resolutions related to the Denuclearization of the Korean peninsula and stop testing of ballistic missile launches,” President Jokowi said. Nevertheless, President Jokowi conveyed his appreciation to President Moon’s stance that is still opening the settlement through a dialogue process.

Earlier, at the start of the joint press conference, President Jokowi said it was an honor for him to receive a state visit from President Moon Jae-In at the Bogor Presidential Palace. “President Moon’s visit is the first visit to ASEAN countries. This needs to be interpreted as a strong commitment to continuously improve bilateral ties between the two countries,” President Jokowi explained.

Meanwhile, the Korean President is accompanied by Foreign Minister Kang Kyung-wha, Minister of Commerce, Industry and Energy Paik Un Gyu, Minister of Land, Infrastructure and Transport Kim Hun-Mee, Ambassador Extraordinary and Plenipotentiary of the Republic of Korea to Indonesia Cho Tai Yung, as well as the special staff and other deputies. (EN/DID/OJI/ES) (MUR/YM/Naster).