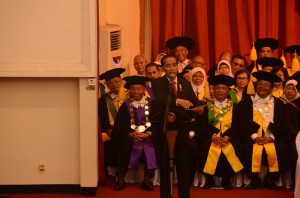 President Joko Widodo speaks at a public lecture of the Lustrum at Solo National University (UNS), in Solo, Central Java, on Friday (11/3) morning

President Joko Jokowi Widodo asserted that we are facing the competition every second, minute, hour, and day. It does not only happen among cities, provinces, persons, but we are entering competition among countries.

It is a competition and it can not be avoided. We can not say that we will do it later. This is the openness that we must face, not only at ASEAN Community, in a few time we will face competition on trade blocks. If we do not prepare our human resources, we will be left behind in the competition, President Jokowi said when giving a lecture of the Lustrum at Solo National University (UNS), in Solo, Central Java, on Friday (11/3) morning.

The President reminded that the worlds population will reach 12.3 billion people in 2043, or drastically jump twice from the current amount. What will happen then, according to the President, must be prepared from now.

According to President Jokowi, the world will fight over two things, i.e. food and energy. On food sector, the President added, there will be a competition, and fortunately, we excel at both.

President Jokowi asserted that we have the potential and the power on the amount of food and energy. The President took an example that there is 4.2 million hectares of land in Merauke, Papua. If those lands are planted with rice, it will exceed current national production or about 70 million tons of rice. It is only in one regency.

This is our power for the future, we have all kinds of energy, including fossil energy. However,  management of our economy is not designed properly, the President explained.

However, President Jokowi encouraged the people not to afraid and worry about those things, because other Heads of ASEAN countries told him that they are also afraid if Indonesians come to their countries.

Thus, do not be afraid. We are the one who should make other countries afraid. When I saw comments in social media, I realized that we lack of optimism. This is what we need to improve, so that other countries will see that we are serious. Let us imagine if half of Indonesian population enter their countries, how  we compete, President Jokowi added.

Therefore, according to the President, the most important thing is to improve the field that we are now lacking as soon as possible. The President took an example of dwelling time at the seaport in Singapore takes 1 day to finish, Malaysia takes 2 days, while Indonesia takes 6-7 days to finish.

For the record, I have been working on export and import sectors for 24 years. I was wondering who are responsible for the wrongdoings because many people involved in that matter. The question is;  who is the slowest? I have to remove one minister from the position because of the dwelling time, but now the dwelling time only takes 3-4 days to finish. Our target for next month is to reach Rp. 3,740 trillion, and I believe the dwelling time will only take 3 days to finish. We will materialize it by any means, whether I must replace another minister or other ways, President Jokowi explained.

The President also stressed on the speed, for example on the permits. When President Jokowi visited the Investment Coordinating Board (BKPM), he was informed that the permits could take 6 months or a year to finish. Therefore, the President instructed all ministries to join BKPM through one-door-service. Three months later, only half ministries joined the BKPM.

Why is it hard? According to the President, it is because money talks. However, when the President said that it is non negotiable, as many as 21 ministries handed over their authorities. Three months later, the permit only takes a week or two to finish, while contract signing is still at the ministries. Hand over all to the BKPM, I do not want permit takes weeks or days to finish, but in hours, President Jokowi said while mentioning that we will lose in the competition and be left behind if we are not leave this habit (permit that takes much time to finish). It is the only choice, win this or be left behind.

President Jokowi also took an example that we must purchase oil through Petral (Pertamina Energy Trading Ltd), while we can purchase it G to G (government to government) with lower price. The President then dissolved Petral.

A lecture by President Jokowi at UNS was attended by rectors, university leaders in Central Java, Yogyakarta, and its surrounding Provinces as well as mayors, regents, civil servants, military and police officers in Surakarta.