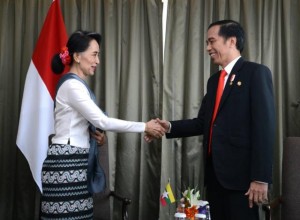 In a move to help Myanmar solve the problem, in addition to emergency assistance at the time, with 10 containers and so on, President Jokowi said that Indonesia has set up mid- and long-term cooperation with Myanmar. “The point is that the Rakhine State (the site of the Rohingya conflict) can develop into an advanced, inclusive, non-discriminatory region,” Retno quoted President Jokowi as saying.

According to Retno, in the meeting President Jokowi offered programs in the fields of health, education, material prosperity, and others.

As for the issue of hospital construction, according to Retno, Suu Kyi said all licensing issues have been resolved from the Myanmar side, so the construction can begin as soon as possible.

In particular, Retno further explained, the meeting also discussed the need for police training, given Myanmar has only half of the nations police personnel. “It was once called that the number of police personnel owned is about 80,000 but actually the required number is 160,000. Suu Kyi said she wants to cooperate with Indonesia in the framework of capacity building for the police,” Retno explained.

The Foreign Affairs Minister added that during the meeting President Jokowi also talked about the issue of the report from the Commission led by former UN Secretary General Kofi Annan, where the Myanmar Leader said that some recommendations have been followed up.

Regarding Suu Kyi’s response, Retno explained that specifically State Councellor of Myanmar expressed her gratitude to Indonesia which has helped Myanmar to resolve the Rohingya issue. “Suu Kyi said that the situation is not easy, but she said that the Myanmar Government’s commitment is very strong to improve the situation in Rakhine State,” Retno said, adding that she thanked Indonesia which has constructively assisted Myanmar, and sent Indonesian Foreign Affairs Minister several times to continue to have a talk with Myanmar. (UN/ RAH/ES) (MUR/YM/Naster).