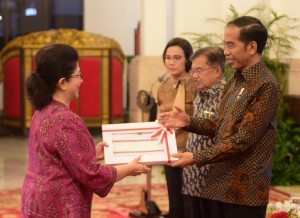 President Jokowi, accompanied by Vice President Jusuf Kalla and Minister of Finance, hands over the Budget Implementation List (DIPA) to Minister of Health at the State Palace, Jakarta, Tuesday (11/12). Photo by: Rahmat/PR.

For the record, the 2019 State Budget provides Rp855.4 trillion for Government Ministries and Agencies and Rp826.7 trillion for Provincial Governments.

On that occasion, President Jokowi said that the State Budget is not only for routine bureaucratic spending or operational expenditure but also for the benefit of the people.

“The priorities of the 2019 Government spending are human capital development, improving competitiveness, strengthening exports and investment, and strengthening the value of money,” the President said.

In the meantime, President Jokowi said that the leaders of Government agencies and heads of regional governments shall pay attention to the following:

First, Government agencies and regional governments should ensure that their programs can be implemented from early January 2019 and the procurement should be done earlier, using e-procurement and e-catalog;

Second, the budget spending should provide maximum benefit for the people by reducing supporting activities such as meetings, business trips, or honorarium for ad-hoc team;

Third, Government agencies and regional governments should monitor the budgets regularly to make sure that all programs run smoothly;

Fourth, Government agencies and regional governments should avoid corruption and budget mismanagement, and make sure that every cent of the budget is spent for the benefit of the people.

“Use the support from internal supervisory apparatus to make sure that the State Budget bring benefit for all the people,” President Jokowi colculded.

Also present during the event were all Cabinet Ministers, Heads of Non-Ministerial Government Institutions, and all Governors. (FID/DNA/RAH)