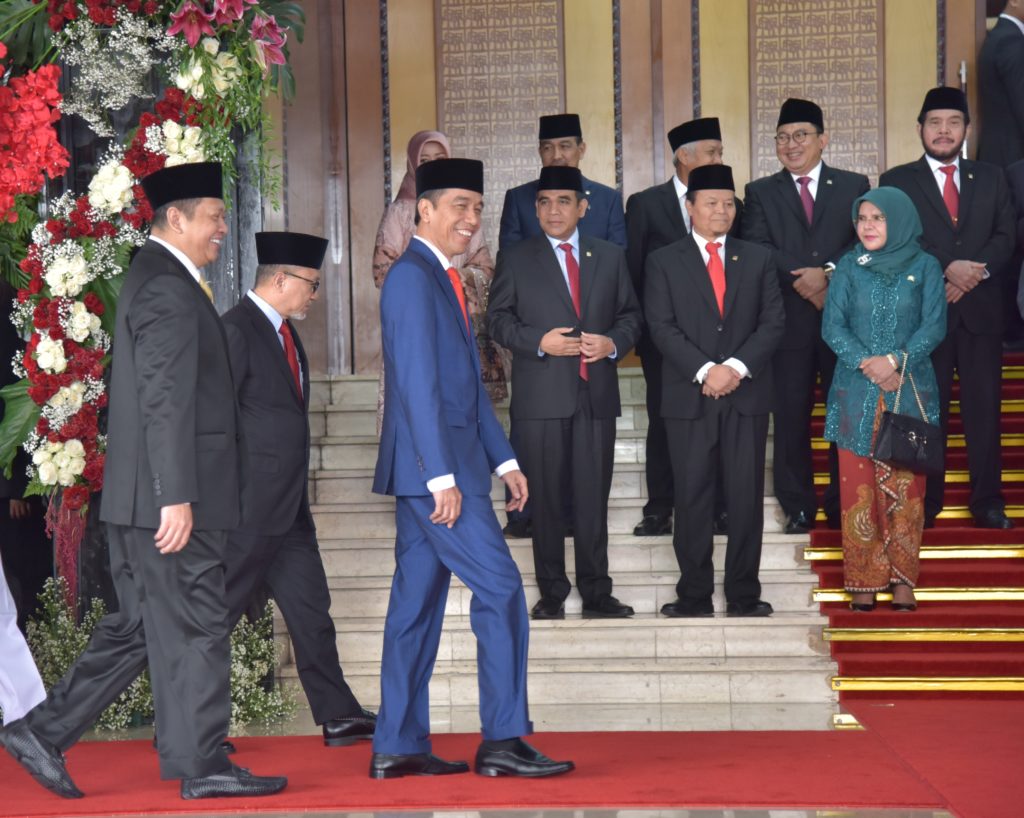 President Jokowi attends the Annual Session of the People’s Consultative Assembly of the Republic of Indonesia 2019, at Gedung Nusantara, Jakarta, Friday (16/8). (Photo by: Deny S/PR)

State institutions should be open to criticism, President Joko “Jokowi” Widodo has said.

“We must not be allergic to critiques.  However harsh it is, it must be accepted as a form of concern and hope that spurs us on to work harder in order to fulfill the hope of the people,” the President said during his address in the Annual Session of the People’s Consultative Assembly of the Republic of Indonesia 2019, at Gedung Nusantara, Jakarta, Friday (16/8).

Therefore, the President called upon all state institutions to build strong synergy in order to accomplish historical tasks, to support leap of progress in alleviating poverty, reducing social gap, and creating employment as much as possible. “Hand in hand, (we have) to combat the threat of intolerance, radicalism, and terrorism as well as participate in producing even more excellent human capital that can bring about progress for the nation,” he said.

Democracy, according to President Jokowi, requires a dignified, credible, and modern representative institution. For this very reason, efforts of the House of Representatives (DPR) to carry out institutional consolidation must be supported. “The House’s efforts to improve the quality of legal products must be enhanced. The House’s efforts to carry out checks and balances system in one same big vision must also be propped up,” the President stated.

The President highly appreciated the spirit of the House to synergize and collaborate with the Government. In implementing its budgeting function, The House passed Law on Non-Tax State Revenues 2018. The House has also approved Rp70 trillion of Village Budgets allocation for 2019 which will contribute to the improvement of welfare of village communities.

Meanwhile, to the Regional Representative Council (DPD), the President applauded the Council for always to maintain the unity and integrity of the nation. It has also become the vanguard in preserving and revitalizing the values of local wisdom.

“Alhamdulillah, the 2016-2018 Central Government Financial Report receives Unqualified or Wajar Tanpa Pengecualian (WTP) opinion. Similarly, the Regional Governments also record achievements. The number of regional governments that received Unqualified Opinion was successfully increased from 47% in 2014 to 78% in 2018,” the President said, adding that the BPK has also examined the performance and compliance of the government and other agencies, and has succeeded in returning state treasury and assets of Rp4.38 trillion.

President Jokowi also greatly appreciated the Supreme Court in the efforts to create simple, fast, and cost-efficient justice principles. “Nowadays, electronic judicial system is already in place in all justice institutions. Therefore, it is now easier for justice seekers to file a case or make a payment online. Summons and trial notification, as well as to the submission of judicial decisions are run online. In fact, The Supreme Court has moved further by developing e-court towards e-litigation. All these initiative measures deserve our appreciation,” the President explained.

Meanwhile, the Judicial Commission, according to the President, strives to promote the accountability of judiciary in the country. The Commission has carried out its preemptive roles in recommendation of the four Supreme Court judges.

“The Judicial Commission has carried out its preventive roles in organizing in-depth knowledge trainings of Code of Ethics and Code of Conduct for 412 judges as well as overseen 93 high profile cases. The Judiciary Commission also carried out its enforcement roles has recommended that the Supreme Court impose light to heavy sanctions on 55 judges,” President Jokowi said.

All of the achievements of the state institutions, the President stated, are the nation’s shared capital to step forward to face challenges in the future. “Nevertheless, we must not be complacent. We must continue to provide mutual help and remind each other,” the President concluded. (Tim Liputan MPR-DPD-DPR/ES)