President Jokowi: Subsidies for MRT from the Implementation of ERP or TOD 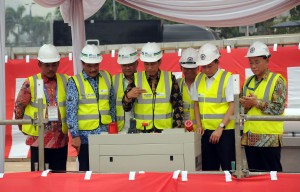 President Joko Widodo (Jokowi) recognizes,  the construction of mass transportation project such as the Mass Rapid Transit (MRT) project is not profitable. However, the government chose to continue the project after calculating what kind of the benefit to the state, to society, to the city.

“If the calculated profit economically, mass transit projects are not profitable. Therefore, the government must decide, how much subsidy is given to the determination of tariffs for example. If there is a subsidy meant there are rupiahs issued by the government,” President Jokowi said answered reporters after inaugurating the operation of the first underground drilling machines, named Antareja in Jakarta MRT project, at the Statue of Youth Build, Senayan, Jakarta, Wednesday (21/9) morning.

According to the President, when he was still serving as Governor of Jakarta, he already counts, the subsidy from the application of ERP (Electronic Road Pricing) or fare electronics for vehicles crossing the main roads of Jakarta, including light rail or light rail transit (LRT).

“Or if not, TOD (Transit Oriented Development) that could be developed in areas stations, could also be an income,” President Jokowi said.

When asked by reporters about the elections of Antareja as underground boring machine name or tunnel boring machine (TBM) of MRT project, President Jokowi said, journalists should get into, in order to see what kind tunnels, already visible. “Later Antareja stay accelerate, in one day could be 8 meters,” he said

President Jokowi then requested the reporter asking to those who understand about the puppet, who is Antareja. “Who is able to penetrate into the ground is Antareja,” he said.

Most importantly, added Jokowi, first, the progress of the process is still appropriate with the schedule. Secondly, if viewed from the neatness, underground work is very neat. President Jokowi argued this case, since he has also been entered in other places, such as in Malaysia, Singapore. (DND/RAH/ES)