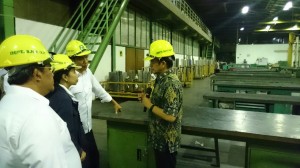 Jokowi President, accompanied by Minister of SOEs, Rini Soemarno listening to the explanation of PT DI President Director, when visiting the company, on Monday (12/1)

After opening the National Conference (Munas) of the Indonesian Young Entrepreneurs Association (HIMPI), and a visit to the Center of Industrial Knitting, as well as a visit to Pindad, President Joko Widodo (Jokowi) then make a visit to a number of places in Bandung, along Monday (12/1).

Some of the places that visited President Jokowi among others manufacturers of Solar Cell PT LEN; Bandung Techno Park; courteous with the family of community leaders of Bandung the late KH. Nana Iskandar Ma’some; visit Bandung Creative Village; and PT Dirgantara Indonesia.

When asked by reporters about PT Dirgantara Indonesia (DI), President Jokowi said, we should be proud to have PT DI which has the advantage. But he cautioned, we also need to know where PT DI will be taken, what the product will do.

President assess, as a country with a thousand islands, Indonesia needs many passengers aircraft that capable in carrying of 30-60 passengers. Therefore, PT DI should focus in that direction. “Consistency is the one who takes, we have to focus on one direction and not mutually direction,” he said.

According to President, if the market PT DI available in the country, then for passenger aircraft with a capacity of 30-60 that which needed by the market, which can fly from province to province, island to island, which only has a short runway. “Therefore, already in the production of the N-219 which passengers 19, may need additional to passenger capacity of over 30,” he said.

President also added that this year the government gives a capital injection of Rp 48 trillion for a number of State-Owned Enterprises (SOEs), especially with regard to infrastructure (Pelindo, Angkasa Pura, Wijaya Karya, Anindya Karya, Adhi Karya).

According to President Jokowi, PT DI has the opportunity to obtain an injection of funds. However, he cautioned needed to be strengthened in marketing side, so that there is an order for five years, so the government can inject the funds.

“The calculation is not only related to the profit and loss but it is also a matter of pride,” said Jokowi.

Accompanying President Jokowi during a visit to PT DI, among others, Minister of  SOEs, Rini Soemarno; and Cabinet Secretary, Adi Wijayanto.  (Humas Setkab/ES)