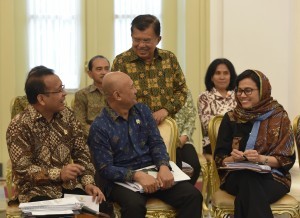 Vice President Jusuf Kalla talks with a number of ministers before a Plenary Cabinet Meeting on Monday (29/5), at the Bogor Presidential Palace

President Joko Jokowi Widodo hopes that investment grade status that was granted to Indonesia by several international rating agencies such as Moodys, Fitch Rating, and Standard & Poors (S&P) will not only bring benefits to the portfolio investment, or the stock market, but also bring other positive impacts and promote real sectors in order to develop the economy.

Because this trust can show our capability in managing our economy, both fiscal and monetary economy. However, the question now is on how to stimulate positive impacts out of the investment grade so that the benefits can be felt by the people is the most important thing, President Jokowi said in an introductory remarks at a Plenary Cabinet Meeting on Monday (29/5), at the Bogor Presidential Palace, West Java.

Therefore, the President called on related ministries to stimulate their real sectors. The President also  asserted that the obstacles in cash and capital inflows, as well as in the influx of investment to Indonesia should be overcame.

Firstly, the issues on permit sector. The President instructed Coordinating Minister for the Economy to monitor the matter of permits in detail so that those considered detrimental to the investment can be simplified. Thus, the complicated permit will not hamper the influx of investment.

According to the President, that kind of explanation is really important because the public, particularly the international society, often question that issue. But, they will understand if they were given an explanation, the President added.

I think the Coordinating Minister should explain that Indonesia holds Regional Election for governors, mayors, and regents each year, and it will inevitably heat up our political climate, the President said.

Moreover, President Jokowi asserted that permits particularly at ministerial level should be simplified. The ministerial regulations which are about to be issued should be held and when the issuance of those regulations is inevitable, the President instructed all to discuss it first in a Limited Meeting.

President Jokowi noticed that there are still many ministries issuing ministerial regulations that will be followed up by the issuance of regulations by the ministries subordinates. According to the President, it will hamper investment.

Regarding limitation and restriction, particularly in the Ministry of Trade, President Jokowi asked it to be reviewed whether the regulation is still needed or not.

This will make the controlling much easier and will increase state income, the President concluded.