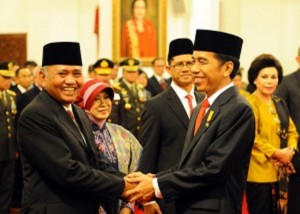 President Jokowi congratulated newly elected KPK Commissioner Agus Rahardjo, who was accompanied by his wife and other KPK Commissioners at State Palace, Jakarta, on Monday (21/12)

President Joko Jokowi Widodo on Monday afternoon (21/12) at the State Palace swore in five newly elected commissioners of the Corruption Eradication Commission (KPK) for the period of 2015  2019.

The swear-in ceremony took place after the Presidential Decree Number 133/P of 2015 on the Appointment of Commissioners of the Corruption Eradication Commission (KPK) for the period of 2015-2019 was read.

The five KPK Commissioners were previously selected by Commission III of the House of Representatives of the Republic of Indonesia (DPR-RI) overseeing legal affairs on Thursday (17/12) and decided in a plenary session of DPR-RI on Friday (18/12).

It is the risk of my position so I dont have to be afraid, Agus said.

Agus also said that the new KPK Commissioners need 1 or 2 weeks to perform data adjustment and to study facts related to a number of big cases that have not been settled yet.

After the ceremony, the newly KPK Commissioners had a meeting with President Jokowi. They also promised to give a press statement at the KPK office.