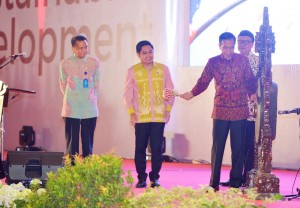 The annual event organized by Association of All Indonesia Regency Governments (Apkasi) was held from 5 May 2016 and aims to promote sectoral potentials of the regencies around Indonesia.

At the closing ceremony, President Jokowi, who was accompanied by Minister of Home Affairs Tjahjo Kumolo, said that the key to win the competition in the competitive era is by creating sustainability between the Central Government and regional governments.

We are a great country, but our speed to take action is hampered by our own regulations. Currently, there are 42,000 of central and regional regulations that slowed down our speed in taking actions, meanwhile the world changes rapidly, President Jokowi explained.

The President hopes the economic policy packages that are currently being implemented will be able to be followed up by the regions by implementing regional regulations that have good quality and not hampering.

It needs to be done because the economic policy packages was not only made for central government but also for regional governments to attract investment and trade.

There are 12 de-regulation economic policy packages that should be followed by regional governments. Do not make rules that would hamper our movement. Currently, there are more than 3,000 regulations that hamper the investment, the President added.

Besides remodeling the regulations that hamper us, the President explained that the synergy between the Central Government and regional governments can be established by accelerating infrastructure development in the regions. The acceleration of development can be performed if the regions provide facilitation in the investment license issuance.

I ask all to accelerate the infrastructure development, for example, the construction of toll road and seaports. People must give their might to promote a region to the potential investors and it will be followed up by processing the permits in a day or in hours, the President explained.

Once the infrastructures are finished, the regions must prepare competent human resources. For example, in order to counterbalance the development of Masela Block that will be finished in 8 years, students who just graduated from high school shall be sent abroad to study. Then, human resources will be ready once the construction of Masela Block is finished. We must carry out this kind of anticipation, the President firmly said.

We are lagging far behind Singapore, Malaysia, and Thailand. I told Coordinating Minister for the Economy that I want our country to be in rank 40 this year, the President added.

On that occasion, the President also wished the regions to be more focus on their potentials. It was aimed to bring efficiency and characteristic of each region.

They must be brave and super focus. Do not work on every sectors or we will lose the efficiency. Let me give you an example, Sunnylands, a city in the United States, concentrates only on the golf course, there are 37 golf courses in Sunnylands. Every day hundreds of private jets enter the city, the President said.

The President went on to say that too much concentrate in different areas of work will give hardship to the regional government in the supervision management.

A regency that has specialty to manage football will become the city of football. We cannot work on every sector, become more focus on something will be better. What become the potential of a regency must be managed. Manage the fishermen and industry, the President firmly said. (RAS/EP/YM/Naster)