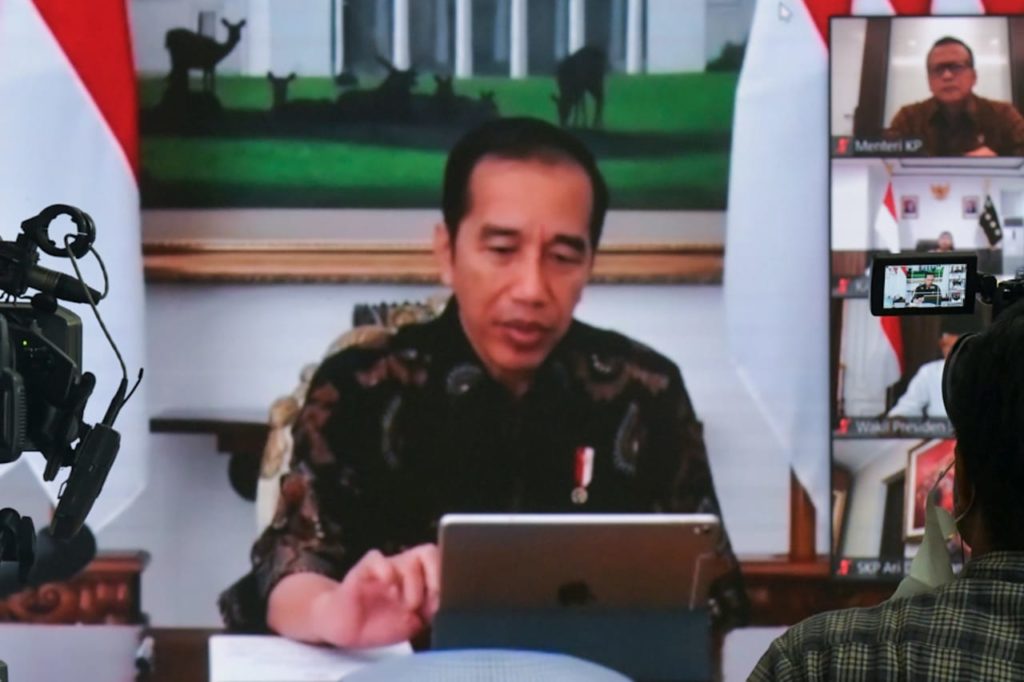 President Jokowi delivers his introductory remarks at a Limited Meeting through video conference on Tuesday (31/3), at the Bogor Presidential Palace, West Java Province. (Photo by: PR/Ibrahim)

The Indonesian Government made its priority to control mobility of people between the regions at home and from overseas, which may pose a risk to bring imported cases, President Joko “Jokowi” Widodo has said during a virtual limited meeting on Tuesday (31/3).

Below are the President’s directives during the meeting:

First, Indonesian citizens returning from overseas, particularly from Malaysia, should be heavily monitored, given that hundreds of thousands or even millions of the citizens may return home.

“I have received reports that in recent days there have been approximately 3,000 migrant workers returning from Malaysia. In addition to migrant workers, we should also anticipate the homecoming of approximately 10,000 – 11,000 ship crew members. We need to prepare how to screen them,” President Jokowi stated.

Second, on the shifting of COVID-19 epicenter to the United States and Europe, Indonesia needs to tighten policies that regulate foreigners crossing into Indonesian territories.

On the arrival of Indonesian citizens returning from overseas, the Government prioritizes ways to protect their health as well as the health of the people in the country.

For this reason, the President emphasized that to handle this matter, some conditions as follows, must be applied:

First, stringent health protocols must be imposed in airports, seaports and cross-border posts.

“For those who show no COVID-19 symptoms, they are included under the category of ODP (people under surveillance) and may return to their hometown,” the President said, adding that after arriving at their respective regions, they should carry out isolation protocol independently and with discipline.

Meanwhile, for those who have COVID-19 symptoms, he said, they must be isolated at the designated hospitals, such as the one in Galang Island of Riau Islands Province.

Second, on the crossing of foreigners to Indonesia, President Jokowi called for a regular evaluation of related policies to anticipate  imported COVID-19 cases. (TGH/EN)