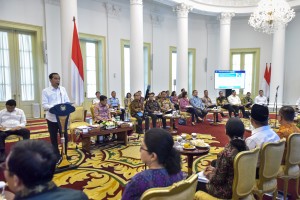 President Joko Jokowi Widodo has reminded his Cabinet to take great cautions in making decisions, particularly on import and export

Data from the Central Statistics Agency (BPS) shows that Indonesias export from January to May 2019 dropped by 8.6%, while import has also dropped 9.2%.

It means our trade balance from January to May has a deficit of USD2.14 billion, President Jokowi said in his remarks during a Plenary Cabinet Meeting held at the Bogor Presidential Palace, West Java, Monday (8/7).

The President also ordered related ministers to examine causes of budget deficit. Particularly in oil and gas sector, I specifically order Minister of Energy and Mineral Resources and Minister of State-Owned Enterprises that are related with this issue, said the President.

Regarding export, President Jokowi said that Indonesia still has big opportunities, especially amidst the US-China trade war, which, he said, can serve as an opportunity for Indonesia to export commodities to the US market, replacing the Chinese products.

This is our chance to increase capacity of our factories and industries, the President said, adding that the Government should also provide incentives for exporters to facilitate them to enter a new market.

I think there are a lot of business opportunities such as in textile, footwear, and furniture sectors. Unfortunately, we always lose the chances because the Government does not provide those incentives, said the President. (GUN/SM/AGG/ES)