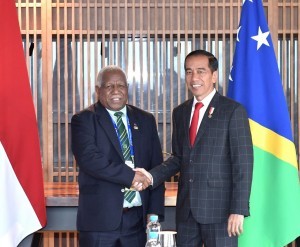 On the sidelines of the APEC Summit in Port Moresby, Papua New Guinea, (Saturday (17/11), President Joko Jokowi Widodo held the first ever bilateral meeting with Solomon Islands Prime Minister Rick Houenipwela and called for closer relations between the two countries.

The President also pushed for cooperation in several sectors, including measures to boost Indonesias investment in the Pacific Island nation. I hope Indonesia will have the opportunity to contribute to the development of the Solomon Islands economy, the President said.

In economic field, the development of palm oil products is one of the focuses of the talk and Solomon Islands is said to have interested in developing the products. Indonesia has a high added value in the palm oil industry. I want to encourage Indonesian companies to develop oil palm in the Solomon Islands, the President said.

Indonesia, the President added, is also ready to embark on cooperation in maritime sector with Solomon Islands. Indonesia is also poised for cooperation in the field of maritime affairs, especially in coastal development and disaster management, he said.

On the occasion, President Jokowi also mentioned about the development that had been carried out in Papua and West Papua in the last four years, such as construction of 4,174 km of roads, 7 airports and 15 ports, improvement of public health and education services, community economic empowerment and one-price fuel policy.

With this development, I am sure that the welfare of the Papuan people will be better, the President said.

For the record, Indonesia and the Solomon Islands have some things in common. Both are archipelagic countries, Pacific nations, have Melanesian ethnicities, and facing the same challenges, including climate change. (Bureau of Press, Media, &Information of Presidential Secretariat/EN)