President Jokowi Tells His Ministries to be Result-Oriented 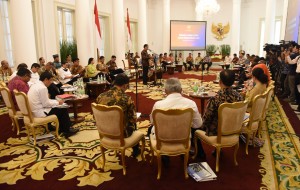 President Joko Jokowi Widodo has instructed his ministries to be result-oriented and to cut down on regulations that impede working performances.

Starting January (next year), we have to run fast. I dont want all of us to be trapped in routines, in business as usual scenario, and to be monotonous, the President said in his remarks before the Plenary Cabinet Meeting at Bogor Presidential Palace on Tuesday (8/12)

All of us must be brave to reverse our orientation from procedure-orientation into result orientation, the President said, adding that the procedures will follow.

It has to be totally reversed.  All of us have to be result-oriented, not procedure-oriented, the President said.

We have to eliminate complicated regulations that have so far caused us to be shackled and made us unable to move fast, to be not flexible, to be unable to jump, the President said, adding that, those things have made the government cannot move fast.