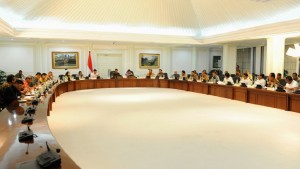 President Jokowi led a limited meeting on Radicalism at the Presidential Office, Jakarta (21/1)

In a limited meeting on terrorism and radicalism at the Presidential Office Jakarta on Thursday (21/1) afternoon, President Joko Jokowi Widodo said preventing acts of terrors is considered necessary and urgent.

He also said that the efforts need a more clear, strong, and comprehensive legal basis so security forces will not hesitate to take action on the ground.

The meeting, however, has not reached an agreement whether the revision of the Law will take the form of Government Regulation in Lieu of Law (Perppu) or to make a new law.

It also needs further discussion with the House of Representatives (DPR), the President added.

Egocentricity and compartmentalization should be put aside, President Jokowi said.

The President also told the Intelligence to improve their counter terror ability, particularly in the detection and prevention of acts of terror.

We must focus on the efforts to weaken the power of terrorism, starting from their ideology, leadership, organization networking, and finance, President Jokowi said.

President Jokowi also asked Ministry of Law and Human Rights, Ministry of Religious Affairs, Ministry of Communication and Informatics, and National Counterterrorism Agency (BNPT) to focus more on the efforts to counter radicalization in the society, as well as to carry out the de-radicalization programs to prisoners and former prisoners of charged with terrorism.

De-radicalization must be followed by monitoring, accompanying former prisoners charged with terrorism when they go back to their community, the President firmly said.

The President further said that there would be a discussion on the National Legislation Program (Prolegnas) of the 2016 priority draft of the Law. (DND/FID/UOJI/ES) (RAS/EP/YM/Naster)