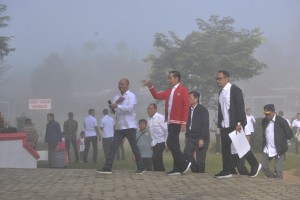 On the second day of his working visit to North Sumatra province, President Joko ‘Jokowi’ Widodo on Tuesday (30/7) is slated to inspect a number of tourist destinations in the province.

According to the press release of Bureau of Press, Media and Information (BPMI) of the Presidential Secretariat, President Jokowi is scheduled to inspect the Salib Kasih Tourism Park in North Tapanuli regency, the Caldera Toba Nomadic Escape in Toba Samosir regency, and visit Ambarita Field to distribute land certificates to local residents.

In the Salib Kasih Tourism Park, President Jokowi inspected the development of a number of tourist parks on the site, including flower gardens, fruit gardens, and water parks.

Afterwards, upon his inspection at The Caldera Toba Nomadic Escape, the President asked the Lake Toba Authority (BPODT) to urge investors to immediately start developing tourist areas around the lake.

“If they don’t start constructing, terminate and replace them,” he added.

According to President Jokowi, there are 386 hectares of land in the Lake Toba tourist area that has been held by the Lake Toba Authority and he ordered that the construction to be started as soon as possible, both by the Government and investors.

“The type of the site is for MICE (meetings, incentives, conferences and exhibitions) tourism,” he added.

“Now everything is done in an integrated manner, either at the central, provincial and regional levels,” President Jokowi said.

The President also said that the development of the area would benefit the residents near the tourism sites.

“If there are many hotels here, there will be a market to sold crafts and crops such as vegetables and fruit. There will also be new employment available,” he added. (DNA/JAY/ES)