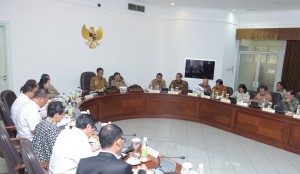 In his introductory remarks, the President hopes that there would be follow-ups to the visits and told his ministers to be focused on following up the visits.

We dont have to be too ambitious. Doing one thing is enough but it must produce concrete results, the President said.

Therefore, President Jokowi instructed coordinating ministers, Minister of Research, Technology and Higher Education, Minister of Educationand Culture, Minister of Manpower, as well as Minister of Industry to immediately coordinate and provide vocational education in a large scale, and to capitalize on available opportunities.

As for the result of the working visit in the UK, President Jokowi said that the follow-up must be focused on the creative economy sector. He also told related ministers to immediately follow-up the cooperation, be it in the matters related to design, handicrafts, performing arts, music and others.

Meanwhile, the result from the working visit to the Netherlands is focused on the maritime sector and President Jokowi said that the Government should concentrate on the sector because the Netherlands has a leading technology in seaport and water management.

I suppose Ministry of Public Works, Ministry of Transportation and other related ministries can focus on this sector, he said.

President Jokowi also reminded that in August this year, Queen Máxima of the Netherlands is expected to visit Indonesia to discuss matters related to financial inclusion. Therefore, the President has told coordinating ministers to prepare everything so that the implementation can be immediately under way.

President Jokowi also noted that financial inclusion has long been initiated but Indonesia has not been able to follow it up well.Now they believe that we can do it, he said.

Regarding cooperation with the European Union, President Jokowi reminded the follow-up of the Comprehensive Economic Partnership Agreement (CEPA). He also said the completion of the initial phase of the negotiations for the CEPA, known as scoping papers  can be immediately finished and the negotiation must be immediately done and followed-up.