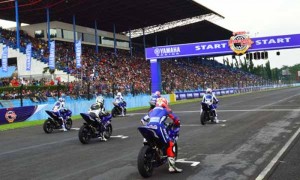 President Joko Jokowi Widodo said that Indonesias plan to host the 2017 Moto GP (Grand Prix) should be reviewed first to ascertain whether the country is really ready to host the event.

The call was made by the President during a limited cabinet meeting that discussed the preparation for the 2018 Asian Games and the 2017 Moto GP at the Presidential Office, Jakarta, on Monday afternoon (1/1).

At the meeting today, the President has decided that the plan should be reviewed first to ensure whether Indonesia is really ready to host Moto GP in 2017, Coordinating Minister for Human Development and Culture Puan Maharani said to reporters after the meeting.

Therefore, Puan added that the President had also instructed Minister of Youth and Sport Imam Nahrawi to make a master plan and the technical guidance regarding  the 2017 Moto GP to decide things to be done (before hosting the event)

The master plan should be made in 2 weeks at the latest, the Minister said.

In the meantime, Minister of Youth and Sport Imam Nahrawi said that the Presidents directive regarding the 2017 Moto GP must be taken into account because the event is a big event and the Government must make well preparation in terms of how to host the event and (deciding) which parties are to be involved.

In principle, the Government fully supports Indonesias plan to host Moto GP, not only in 2017 but also until 2019. And we hope that later on, Indonesia is also trusted to host Formula 1 after  this Moto GP, Imam said. (FID/ES) (EP/YM/Naster)