President Jokowi Tells People to Maintain Unity Ahead of 2019 Election 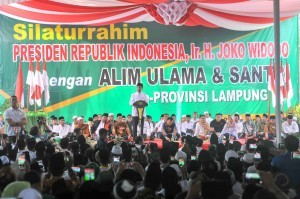 We must maintain our unity, harmony and brotherhood as a big country, the President said at a gathering with Islamic scholars and students of Darussalamah Islamic Boarding School, Lampung province, Friday (23/11).

According to President Jokowi, Indonesia is a big country with 263 million people consisting of various ethnicities, religions, traditions and regional languages.  Indonesia has 714 different tribes living in 34 provinces and 514 regencies/cities, the President added.

The President also gave appreciation for the event because the participants come from different religions and backgrounds, such as Islam, Hinduism and Christianity. This has shown that Lampung is a peaceful city because after all we are brothers and sisters, the President added.

According to the President, a conflict usually starts from different choices during election period that happens once in 5 years. For this reason, President Jokowi reminded the people not to let democracy party as a reason to be divided and to ruin the harmony and unity of our country.  Furthermore, during the Election Day, the President urged the people to conduct small research regarding the candidates to see their track records, achievements and programs for the regions. (FID/JAY/ES)