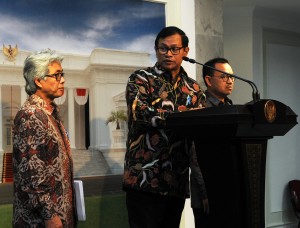 During the limited cabinet meeting on Tuesday afternoon (8/9) at the Presidential Office, Jakarta, President Joko Jokowi Widodo told state-owned oil and gas firm Pertamina to reduce its dependency on US Dollar.

Speaking to reporters after the meeting, Cabinet Secretary Pramono  Anung said that Pertaminas dependency on US dollar is the highest compared to any other companies/firms. He also cited data from Bank Indonesia, which reports that Pertamina needs almost US $ 60 – 80 million per day.

In addition, Pramono said that President Jokowi also instructed Pertamina President Director and Minister of Energy and Mineral Resources to take measures to reduce its dependency on the US Dollar given the current economic condition.

Pramono went on to say that in order to be able to compete at the international level, Pertamina had also been asked to reduce the price of avtur (aviation turbine fuel) because Pertaminas avtur price is higher than the international price.

If the avtur price can be reduced, Pramono said, the benefits are among others long haul flights from airlines such as Emirates, Qatar Airways, Etihad, etc, from Europe, that have so far always  transit in Singapore to refuel could directly fly to Indonesia (to refuel).

If that can be realized, it would certainly bring benefits, not only for our aviation industry but also for the tourism sector, Pramono added.

Pramono further said that, President Jokowi during the cabinet meeting also told Minister of Energy and Mineral Resources and Pertamina President Director to immediately make preparations starting now until the end of next year to build oil refineries and storages for long term needs.

We hope that by 2018, the oil refineries and the storages can be built, Pramono said.