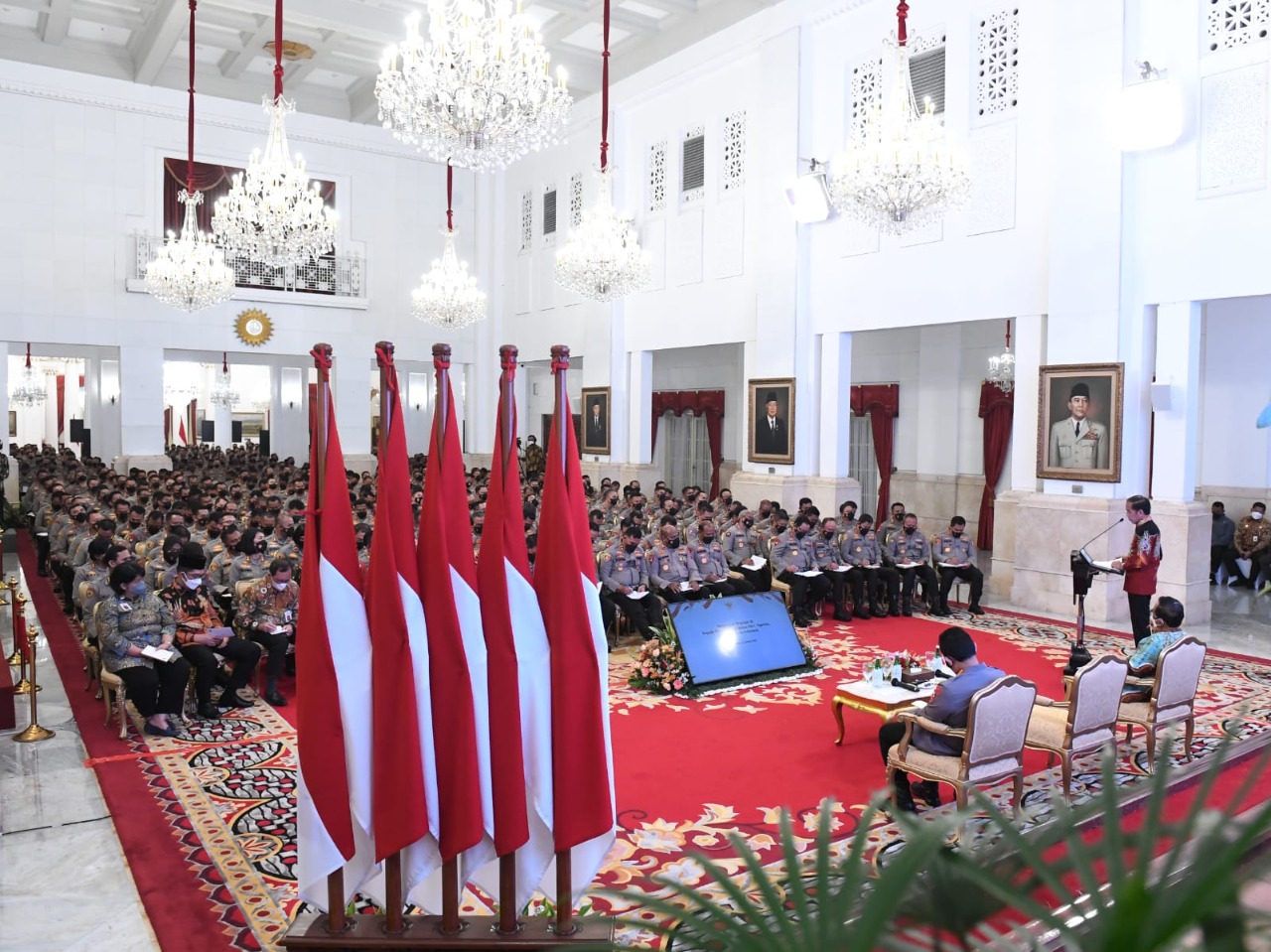 President Jokowi gives directives to the Indonesian National Police at the State Palace in Jakarta, Friday (10/14). (Photo by: BPMI of Presidential Secretariat)

First, the President ordered the police to handle public complaints against the police institution.

“29.7 percent of the people’s complaints against the police is about illegal fees. Please pay attention on personnel that collect illegal fees. Do refrain from being authoritarian. Do avoid repressive approaches. On the third place at 19.2 percent, finding fault. And the fourth, lavish lifestyle, which I have mentioned before,” he said.

Third, the Head of State ordered the police to remain united as an institution and to maintain solidarity with the Indonesian National Defense Forces (TNI). It is important as the country is entering a political year and the general election process has begun since last July.

“You must show solidarity within the Indonesian National Police. When it is done, the solidarity of the police and the TNI will reduce political tensions in the future. Solidarity. You must be sensitive of the political situation because you are the highest-ranking officials in your respective regions. You must have a sense of politics. Even if you are not involved in politics, you must understand political issues because we are entering a political year,” he said, adding that if the TNI and the police are united, the country will have security and political stability.

Fourth, the President ordered the police to realize their institution’s vision and to be assertive in implementing their policies. The President instructed regional police chiefs to not be afraid and to work according to the standard operating procedures and the law.

Finally, the President urged the police to strictly enforce law. Hence, the President ordered the Chief of the National Police to eradicate online gambling and drug trafficking networks to regain the declining public confidence in the police.

“I have ordered the Chief of the National Police to eradicate online gambling. I need not talk much. You are all aware about this order and law enforcement related to drug trafficking. This way, the police will regain public confidence,” he said.

Closing his remarks, the President also ordered the police to design a strategy for public communication that is good and fast in responding to an issue or event while reminding them that this is the era of social media and events can be shared within minutes and seconds.

“Once again, this is the era of social media. Events are shared within seconds, within minutes, not within days. Once there is a small incident and you do not handle or communicate it well because you think that it is small, it will be big very fast and it will be difficult to resolve,” he remarked. (FID/UN) (DH/MMB)