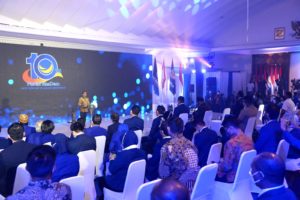 President Jokowi delivers remarks at the commemoration of the 10th anniversary of Nasdem Party, Thursday (10/11). (Photo by: Presidential Secretariat/Kris)

President Joko “Jokowi” Widodo called on the public to make use of the momentum of Indonesia’s G20 Presidency next year for the sake of national interests.

The President also said that the appointment of Indonesia as the first developing country to hold the G20 Presidency is an honor for the nation.

“It is an honor for Indonesia to hold the G20 presidency. We will organize the Summit in Bali island,” he said during his remarks at the commemoration of the 10th anniversary of Nasdem Party, Thursday (10/11).

The President went on to say that during G20 Presidency starting 1 December 2021 until 30 November 2022, Indonesia will hold approximately 150 meetings on finance, climate, and digital economy.

The country will also assume the chairmanship of the Association of Southeast Asian Nations (ASEAN) in October or November 2022.

With the two chairmanships, President Jokowi expressed hope that all citizens can be proud of it and they will be respected by people from other countries as well.

“I don’t want inferiority and colonial mentality internalized in our people,” he firmly said while encouraging the public to build self-confidence and optimism as a leading nation [that encourages others] to make changes.

On that occasion, President Jokowi reminded the audiences about the richness of Indonesia’s cultural heritage and moral values which are very important to strengthen national identity and character. He also called on the public to always preserve the values.

“Our diverse arts and culture are our strength. After developing massive infrastructure, the country will focus on developing human resources and their capacity as our foundation to advance the nation,” he remarked.  (TGH/AIT/SLN) (RAS/MMB)