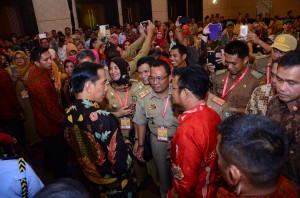 President Joko Jokowi Widodo said that there are five important aspects that the government, be it the central government, provincial governments, regency governments and city governments, have to pay attention to namely economic growth; unemployment rate, poverty level, inflation and Gini coefficient ratio.

According to the President, hard work and efforts made by the government would be to no avail if those five aspects were not paid attention to.

The statement came when the President opened the 5th National Assembly of the Association of Indonesian Provincial Administrations (APPSI) at Grand Clarion Hotel in Makassar, South Sulawesi on Wednesday (25/11).

According to President Jokowi, Indonesias economic growth at Quarter III of this year is at 4.73%, unemployment level is at 6 percent, poverty level at 11 percent, inflation until October is at 2.16 percent while Gini coefficient ratio is at 0.41.

But please also pay attention to the inflation. Please control it, especially matters related with the prices of basic commodities. Stability can be seen from inflation, the President said.

He also said that some people told him about the rising prices, about the prices of goods that are now expensive or about inflation rate that is half of that of last year.

However, the President believes that inflation would be at around 3.6%  3.8%. But it could be higher because it is still in December, the inflation will usually be a bit higher, but Insha Allah it will be below four.

What does it mean? It means prices at the regency/city/provincial/national levels are under good control, the President added.

Therefore, the President hopes that next year all governors, regents, mayors could continue to reduce inflation rate to be under 3 and the following year could be under 2.

Were going to continue to make the efforts because in European countries on average or in developed countries, inflation is usually below 2, he added.