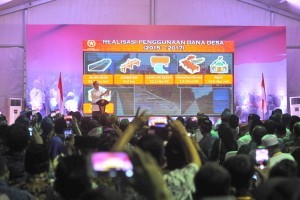 President Joko Jokowi Widodo invited all elements of the community, particularly village facilitators to continue to monitor the Village Fund allocation so that its use is right on target and it provides benefits to the people in the village, said the President when giving a speech at the Dissemination of the 2019 Prioritized Village Fund Use and Evaluation of the Development Policies and Empowerment of Village Communities in Banten Province, in Froggy Field, Foresta Business Zone, Tangerang, Banten, Sunday (04/11).

According to the President, the increase in the allocation of village funds is proof that the current Government is paying a serious attention to the village development. Earlier, Minister of Village, Disadvantaged Region, and Transmigration has reported that first, poverty in the village has decreased twice as many as to that of in the city, which means 1.2 million people can be alleviated from poverty,the President added. Second, the President went on to say that stunting which might occur due to malnutrition can be reduced from 37 percent to only 30 percent.

The utilization of village funds can be seen through the construction of infrastructure such as village roads, ponds, village-owned enterprises, sanitary latrines, the integrated health service posts (posyandu), and small bridges throughout the country.

For example, village roads. What you see in your village maybe 300 or 500 kilometers, but the total village roads that have been built in 74,000 villages across the country are 90,000 kilometers, the President said

On the occasion, the President also added that to date,with the allocation of village funds, 914 bridges have been built and access to clean water for 22,000 heads of households can be materialized.

Why I have to tell you this? Because, whenever I go to the regions, I always monitor them, I really want to see the progress, the President explained.