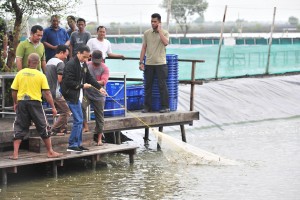 Vannamei shrimp farmers should be careful in expanding their business, according to President Joko Jokowi Widodo when attending vannamei shrimp harvest in Bekasi, West Java, Wednesday (30/1).

“The harvest in February (2018) failed. The second (harvest) was only half-successful,” the President said, adding that failures in previous harvests should serve as a lesson for the farmers.

President Jokowi added that out of 80 hectares of aquaculture ponds that are given to the community through Social Forestry Community Empowerment Program, only 10 hectares are allocated for cultivation of vannamei shrimp. He said that the Government would carefully expand the program since it involves a lot of money and loans from banks.

“We must not let the shrimp farmers fail. There is a huge demand for vannamei shrimp, especially for exports,” the President said, adding that cultivating vannamei shrimp is not easy since it is affected by several factors such as the environment, temperature, and oxygen.