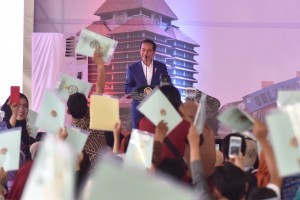 Ahead of the so-called political year, President Joko Jokowi Widodo called on the public to refrain themselves from slandering, denouncing, and vilifying each other.

“Slandering, mocking, vilifying are not religious and ethical values ??that we uphold. Be careful,” the President said at the handover of 4,000 land certificates for the residents in Depok, West Java, Thursday (27/9).

The President also cited an example of him being called a member of the banned Indonesian Communist Party (PKI) on social media. In fact, the President explained, he was only 4 years old when the party was dissolved in 1965. Is it possible for a toddler to join the party?, he said, adding that some people still believe in it because it is frequently being told, so it is considered as truth.

The President also reminded the people that Allah SWT has blessed Indonesia with the diversity of faiths, ethnicities, customs, traditions, and cultures. “They are all different. It is already a sunnatullah (Gods law) that God has given us, the Indonesian people,” the President said.

On that occasion, President Jokowi urged the people to maintain ukhuwah Islamiyah (brotherhood) and ukhuwah wathoniyah (nationalism), adding that the greatest asset of this nation is unity and harmony. “Don’t let the legislative and presidential elections divide us. We cant let that happen. We are all brothers and sisters,” the President firmly said.

The President also urged voters to put forward the candidates vision, ideas, and track record as well as achievements before voting for one of them in the elections.