President Jokowi Thanks Mass Prayer Participants for Their Prayers 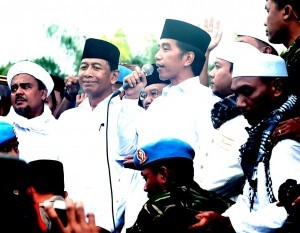 PresidentJokowithanked participants of the mass prayer held at the National Monument, Jakarta, Friday (2/12). (Photo by: Bureau of Press and Media/Laily)

President Joko Jokowi Widodo on Friday (2/12) joined other thousands of participants of the mass prayer to perform Friday prayer at the National Monument in Central Jakarta.

On that occasion, President Jokowi also expressed his appreciation for the participants of the mass prayer for attending the event in a peaceful manner.

First of all, I would like to thank you all for the prayers and the dzikir(mass chants in praise of God) that you have given for the safety of our country and nation. I would also like to extend my highest appreciation because all participants who attend this event in an orderly manner so the program could proceed well. Allahu Akbar, Allahu Akbar, Allahu Akbar (God is great), the President said, which was replied with Allahu Akbar from the thousands of people attending the mass prayers.

Ending his remarks, President Jokowi also wished a safe trip home to the participants, who came not only from Greater Jakarta but also from other areas in the country.

Once again, thank you and have a safe trip home to your respective areas. Thank you, the President said.