President Jokowi: the Government to Develop Airport in Jakarta, Bali, and Papua 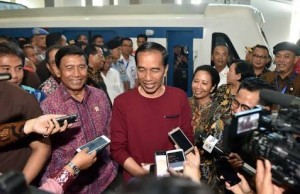 Minister of Transportation, Budi Karya Sumadi, held a meeting with  the Directorate General of Civil Aviation and Airnav Indonesia Directors at JATSC, Soekarno-Hatta Airport, in Tangerang, Banten, on Saturday (3/2), to discuss airport development in Jakarta, Bali, and Papua.

Today we have a meeting to learn improvement plan of Airnav in three locations; Jakarta, Bali, and Papua. These three locations are important because of  their high-density, the Minister said.

As for Jakarta, the Minister said that lots have accomplished to reconstruct and intensify airplane movement. He added one example of it is the development of the third runway of Soekarno-Hatta Airport.

He hopes that the third runway will intensify airplane movement reaching more than 100 movement per hour. The length of the third runway are planned to be 3,000 metres which will not be independent, because the distance to the second runway was only about 500 metres.

Talking about land acquisition, the Minister further said, will be finished in April, while the development has been started firstly by constructing taxi way connecting the third runway.

The third runway is indeed not independent with distance from second runway not more than 550 metres. But Soekarno-Hatta Airport will be better, safer, especially its maintenance. Currently the maintenance is carried out during runway operational time consequently having a short window time. If the third runway is existing, maintenance one runway could be carried out while the other two in the use. Jakarta is a capital city, therefore we must assure maintenance process is well-performed, the Minister explained.

As for Bali, in line with the preparation of  IMF meeting in October, parking stand repair and a better systematic airplane movement is undergoing by Angkasa Pura I, so that 28 airplanes movement at Bandara Ngurah Rai will become 35.

It is estimated, there will be 100 movements on the day of the meeting. Based on our calculation, we could have 300 movements in a day, so it will be no problem, but we will utilize the round and stayed airplanes, because on the day it will be impossible to have the airplanes parked. There are other airports around Bali which we can use. We should manage it well because it is an important event to promote Indonesian tourism, especially in Bali, the Minister conyeved.

The Minister also instructed all domestic flights to Bali on the the event to use wide body airplanes. We use wide body so there will be more space to be used. On the days of the event, perhaps, small airplanes could be arranged not to fly to Bali. Use bigger airplanes instead, he added.

In Jakarta and Bali, the concern issue is about level of service. Meanwhile, in Papua is level of safety. The Minister said that safety issue in Papua is not optimal yet.

Aside equipment improvement, map on route, etc., two other airports in Papua -Timika and Dekai Airports- should be used as starting point to other airports.

With its high density, window time in Papua perfomes in only two hours in the morning and if the airplanes take off from three location, its probality will be higher. Traffic lines will be increased three times so that airplanes will be not overloaded. Overloaded airplanes will sometimes made overshoot. We should make better improvements in Papua, the Minister explained.

Papua has more than 500 airports, but big airports are only about 200 and many are in highland. Previously, in Papua flight use visual. But then we added ADSB. The improvement made visual no longer be used, the Minister concluded (Biro Komunikasi dan Infromasi Publik/EN) (EPI/YM/Naster)