President Jokowi: The state, the nation and the people may not be fearful, must not bow down to terrorism 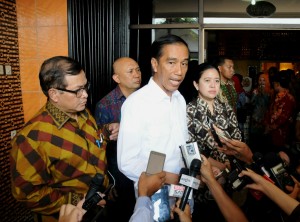 President Joko Jokowi Widodo delivered a press statement after devices exploded outside a Starbucks cafe and a small police post near the Sarinah shopping center on Jl. MH Thamrin, Central Jakarta, on Thursday (14/1).

In a statement, President Jokowi expressed his deep condolences for the blasts, which claimed seven lives.

We all certainly grieve for the fallen victims of this assault, the President said in Cirebon, West Java during a working visit to the city after overseeing the construction Kertajati airport in Majalengka, West Java.

President Jokowi also condemned the attacks, which have disrupted public security and public order and spread terror among the people.

President Jokowi also said that he had instructed the police and related institutions to arrest the terrorists.

I have instructed Chief of the Indonesian National Police (Kapolri), Coordinating Minister for Political, Legal, and Security Affairs to chase and arrest the terrorists, be it those involved in the attacks and those behind them, the President said.

The President also called on the people not to be fearful of the acts of terror that happened on Thursday.

The State, the nation, and the people may not be fearful, must not bow down to this act of terror and I hope that the people would remain calmed because everything is under control now, he added.

After delivering his press statement, the President also said that he cut short his working agenda in Cirebon and would return to Jakarta.