President Jokowi: There is nothing to Worry about Politic 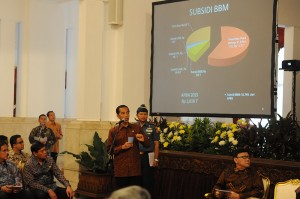 President Jokowi: There is nothing to Worry about Politic

President Joko Widodo (Jokowi) asked all governors and police chiefs not to worry about political development in the homeland.

When he opened National Coordinating Meeting (Rakornas) of the Working Cabinet at State Palace, Jakarta on Tuesday (4/11) morning, President Jokowi said that guests from abroad, including investors always expressed their concerns about our political tension.

What happened in DPR in which DPR fragmented with Counter DPR, according to President Jokowi, was only an ordinary political dynamic. I think there should not be any worries, this will over soon, he said.

In the meeting which was attended by Vice President Jusuf Kalla, President Jokowi also highlighted the big amount of apparatus budget compared to that of allocated for development.

All I know, the figures in cities and regencies are 80-20 in average, also 85-15, with apparatus budget 80, and 20 for development. This is dangerous, it should be changed, Jokowi explained.

He elaborated that when he served as Mayor, the position of apparatus budget compared to development budget was 74-26. But after one year of his service, the percentage could be turned into 49-51.

I ask Governors to deliver this to regents, mayors, to take apparatus budget where possible and shift it to development budget, it can be done, Jokowi conveyed his message.