President Jokowi: This Nation Needs Young People who are Brave and Honest 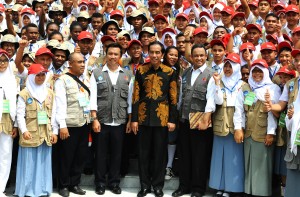 When opening the Student Leadership Crater (KKP) in 2015, that followed by 1,176 students selected from all over Indonesia in the courtyard of Merdeka Palace in Jakarta, Wednesday (18/11), President of Joko Widodo (Jokowi), reminded the participants that the challenges facing this nation in the future will be stronger and more complex. The competition is not only individual to individual, not only the city with the city, province by province, the competition is now between countries, between countries.

“The KKP could be a crater of Candradimuka to build a new leadership that has the character, so it would appear that the young leaders of positive creative personality, personally optimistic, tolerant, loves humanity, spirit of mutual cooperation, confidence. I suppose it takes all of my children for the future,” President Jokowi said.

The Head of State wished, when returning from following the activities of the Student Leadership Crater, the participants are all growing at a personal, with good manners become good leaders in their respective places.

“You all should be an example for friends in the neighborhood, humble, achievement, noble morals, has good morals. If there are, friends who like brawl tell them. If there are one or two colleagues who use drugs, tell them. Alternatively, the like moving towards a thug, tell friends that you all become a model for the surrounding environment, “the Head of State message.

“The nation needs young people that enthusiastic, volunteering to help others without distinction of ethnicity, religion and race. Our Nation sincerely hope to all of you,”  President Jokowi concluded.

Attending the opening of the program, among others, Minister of Education Anies Baswedan and Minister of Youth and Sports Imam Nahrawi.. (FIT/RAH/ES)/Sy.