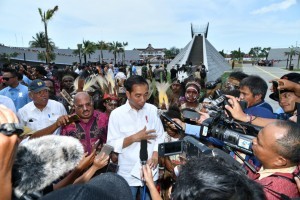 So, later in 2085, it will be opened by our successors. Can we make those seven big dreams come true? So, this is not just an ordinary monument. This is our shared dream monument, the President said.

The President explained that in order to be read and lasted for decades, the seven dreams are put in a very futuristic capsule. I follow the news on social media that many people say it looks more like the Avengers headquarters, which is also very futuristic, said the President.

The monument, the President continued, has the same soul and spirit as the Avengers.

They do not only have big dreams but take a great action to protect the people, the weak. Similarly, through this monument, we do not only put our dreams as a great nation, but we will work hard, work together, strive to realize that big dreams, the President said.

The seven dreams are as follows: