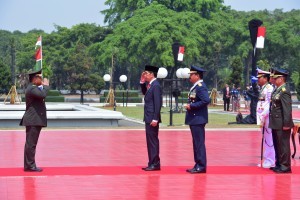 As the highest commander of the Indonesian National Defense Forces (TNI), President Joko Jokowi Widodo said that the President, along with the TNI, is responsible to maintain Indonesias unity through the enforcement of Pancasila, the 1945 Constitution, and Bhinneka Tunggal Ika (Unity in Diversity) principal.

Together we fight against other ideologies besides Pancasila and to eradicate communism and to remove the existence of the Indonesian Communist Party (PKI) from Indonesia, President Jokowi said in his remarks at the ceremony to commemorate the 73rd Anniversary of the TNI, at TNI Headquarter, Cilangkap, Jakarta, Friday (5/10).

On that occasion, the President also asked the TNI personnel to improve their skills to make the TNI become more professional and modern in order to play a bigger role in the Asia and in the world. President Jokowi also ensured the military personnel will have a prosperous standard of living in the future.

President Jokowi also thanked the entire TNI personnel for their commitment and dedication in serving the country. You must uphold the Sapta Marga (seven oaths of the TNI soldiers) and maintain the unity between the TNI and the people, and continue your devotion for our country, President Jokowi added.