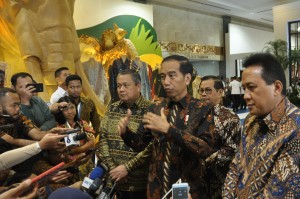 Approximately, the composition is going to be 60:40 or 50:50, President Jokowi told reporters after attending the opening of the 2019 Karta Kreatif Indonesia (KKI) in Central Jakarta, Friday (12/7).

According to the President, he has pocketed the names and criteria for ministers in the upcoming cabinet that to be announced as soon as possible.

President Jokowi further said some of the ministers in the current cabinet will remain in their positions.

Asked by reporters about whether there would be ministers from the younger generation, the President said he would ask political parties to recommend their potential young members. If they dont recommend anyone, we can still choose young ministers from professionals, he added. (FID/OJI/ES)