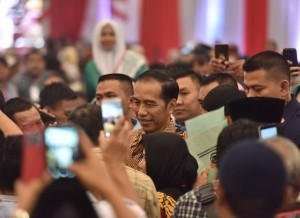 President Joko Jokowi Widodo said he respects the decision made by Muhammad Sirajuddin Din Syamsuddin – the President’s Special Envoy for Dialog and Interfaith and Civilization Cooperation  to resign from this post. The President also admitted to have received his resignation letter and met him as well.

“Pak Din certainly has a lot of careful grounds to resign from the post, presumably because of political considerations as he wants to be neutral. I respect his decision,” the President told reporters at the handover of land certificate at ICE BSD, Tangerang, Banten, Wednesday (9/26).

Asked about Din’s successor, President Jokowi said that he would immediately appoint the new envoy to fill the post. “(The appointment of the new envoy) will be done maybe today or tomorrow, given that this institution is very important for interreligious dialog. We have many potential candidates. I am about to make the decision,” the President concluded.