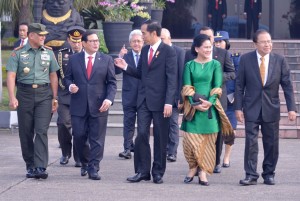 President Joko Jokowi Widodo on Thursday (26/5) has left from Halim Perdanakusuma Airport, for Nagoya, Japan, to attend an outreach meeting during the G7 Summit at the invitation of the Japanese Prime Minister Shinzo Abe.

The President will participate in the G7 outreach meeting on Friday (27/5), in Ise-Shima, Japan, located two hours from Nagoya.

The Group of 7 (G7) is a group consisting of Canada, France, Germany, Italy, Japan, the United Kingdom, and the United States. These countries are the seven major advanced economies as reported by the International Monetary Fund. The G7 countries represent more than 64% of the net global wealth ($263 trillion).

The meeting is set to discuss two main issues, namely stability and prosperity in Asia as well as sustainable development, women empowerment, and global health. Indonesias participation at the meeting is expected to contribute in addressing global issues.

President Jokowi will be one of the keynote speakers in the discussion on stability and prosperity in Asia.

The President is also expected to highlight the importance of global partnerships and global health coverage in the discussion on the other main issues.

The President and his entourage are scheduled to return to Jakarta on Friday (27/5). (TKP/ES)(RAS/EP/YM/Naster)