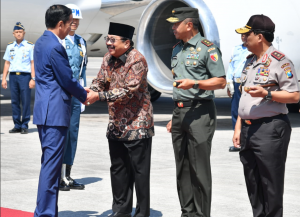 President Joko Jokowi Widodo on Thursday (6/9) morning at around 08.20 WIB (West Indonesian Time) and his entourage departed to East Java Province for a working visit.

Deputy to Presidential Secretariat Chief for Protocol, Press, and Media Affairs Bey Machmudin in his press release said that the President was scheduled to give a public lecture while attending the inauguration of the National Working Meeting of the Educational Institution Development Board of the Indonesian Teachers Union (PGRI) at Hasta Brata Stadium, PGRI Adi Buana University, Surabaya.

The President is also slated to distribute 5,000 land certificates to residents in the Surabaya, Sidoarjo, Mojokerto, and Gresik in Jatim Expo, Surabaya.

Before returning to Jakarta, the President will also visit the Bumi Shalawat Progressive Islamic Boarding School, Sidoarjo Regency, Bey said, adding that the visit to school marks the end of President Jokowi’s working visits in the province.

The President and his entourage are scheduled to return to Jakarta later in the evening.