President Jokowi to Have Consultative Meeting Discuss Fight Against Terrorism 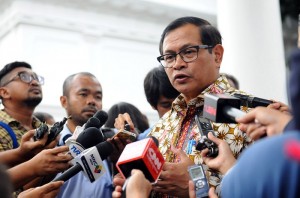 President Joko Jokowi Widodo on Tuesday (19/1) at 10 am at the State Palace, Jakarta, is scheduled to have a consultative meeting with leaders of state institutions to discuss the latest issues, especially related to the fight against terrorism, according to Cabinet Secretary Pramono Anung.

Asked about the amendment of the Law on Anti-terrorism, Pramono said: Well see tomorrow (on Tuesday). However, one thing for sure, based on the experience (of the Thamrin attacks), actually since November, we have suspected, sensed, felt and had an early detection of activities that are unusual. However, based on Law Number 13 of 2003 along with the Presidential Regulation Number 1 of 2002, which was formulated after the Bali bombing, there are parts that do not enable us to take actions. Pramono said to reporters after a coordinating meeting at the State Palace on Monday afternoon (18/1). He added that the existing law did not give authorities enough power to take what he called preventive measures.

Pramono added that the Government hopes to get inputs, to listen to inputs from a number of heads of institutions.

Indeed, there are certain aspects that are the authority of BIN. However, we maintain that BNPT that is responsible to that, among with the Indonesian National Police. Pramono said.

Law enforcement is still within the authority of the Indonesian National Police, Pramono said. (UN/ES/EN)(EP/YM/Naster)