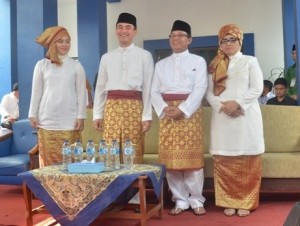 President of the Republic of Indonesia Joko Jokowi Widodo on Friday (12/2) afternoon, at the State Palace, Jakarta, is scheduled to inaugurate 7 (seven) pairs of the elected governor and deputy governor. The inauguration at the State Palace by President Jokowi referred to the Law Number 8 of 2015 on Regional Elections (Pilkada) which is stated on Article 163.

Minister of Home Affairs Tjahjo Kumolo reminded that in the inauguration, the elected regional heads shall not be accompanied by many people to attend the ceremony. Only for governors, deputy governors and their spouses, as well as regional secretaries (Sekda) and the Speakers of Regional House of Representatives (DPRD), the Minister said in Jakarta, on Thursday (11/2).

Afterwards, these regional heads will be invited to the State Palace to receive directions from the President and related ministries, Tjahjo explained. (Puspen Kemendagri/ES) (RAS/MMB/YM/Naster)