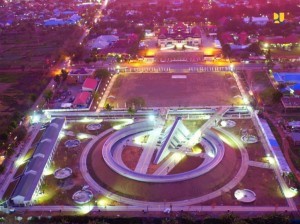 The 2.5-hectare monument is located near Mopah Airport and will be Meraukes new landmark that can be seen from every airplane landing at the airport.

“The progress of monument construction is 100 percent and it is ready to be inaugurated by the President on tomorrow morning. The monument captures the messages and hopes of Indonesian children for the next 70 years,” Minister of Public Works and Public Housing Basuki Hadimuljono said in Merauke, Thursday (15/11).

Basuki further said that the 2015-2085 Indonesian Dream stored in the monument came from young people from all provinces in Indonesia.

“Dreams stored in the time capsule were collected in 2015 through an expedition to 34 provinces. In each province, those young people write their hopes for the next 70 years, which are then stored and welded here, and will be opened in 2085,” the Minister explained.

“The construction of the time capsule monument shows great attention and appreciation from President Jokowi for the Papuan people, especially for residents of Merauke,” Minister Basuki concluded.

For the record, the time capsule monument is built by Ministry of Public Works and Public Housing through the Green Open Space program starting in 2016 and is financed by the State Budget.

The monument are 17 meters wide, 8 meters high and 45 meters long and those numbers have special meaning for Indonesia, representing the date, month and year of the countrys independence.

The interior of the monument is decorated with reliefs showing the journey of the Republic of Indonesia, its national ideology Pancasila, and Papuan culture. Of the total area of ??the monument, 1.5 hectare will be used as a city square.

In addition to being a public open space and tourist attraction for the residents of Merauke, the capsule time monument is expected to generate local economic growth.

The idea for ??building the monument is part of the Ayo Kerja (Lets go to work) movement which was initiated by a musician Abdi Negara as part of civil society movement, and was approved by President Jokowi to become a national movement to realize the dreams and hopes of the young generation towards a developed Indonesia. (BKP Kementerian PUPR/EN)