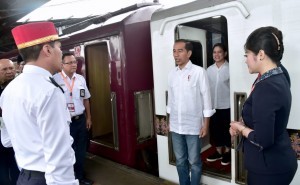 Presidential Aircraft Indonesia-1 took off from Halim Perdanakusuma Air Force Base carrying President Jokowi and his entourage to Bandung, West Java at 07.30 a.m. Western Indonesian Time. Upon his arrival at Husein Sastranegara Airport, Bandung, at 08.00 a.m. Western Indonesian Time, the President  as well as Ibu Iriana, and their entourage headed to Bandung Train Station to continue their trip to Garut Regency on a train.

The first location to be visited by the President in his working visit is Cibatu. Before stopping in Cibatu Station, the train stopped for a moment in Rancaekek for a track crossing. In that station, the President took his time to greet people at the station.

President Jokowi is slated to inspect Cibatu-Garut railroad reactivation panel. After the inspection, the President and his entourage will perform Friday prayer in congregation at Cibatu Grand Mosque.

Afterwards, they are scheduled to inspect the implementation of Mekaar project developed by state-owned community development institution PT Permodalan Nasional Madani, at Cibatu Square. For the record, Mekaar stands for Membina Ekonomi Keluarga Sejahtera (fostering the economy of the prosperous family). The President and Ibu Iriana will also directly witness the connecting of electricity to a number of houses in Hamlet 1, Pasar Kolot Village, Garut Regency.

In the afternoon, they will visit Garut Darul Arqam Muhammadiyah Islamic Boarding School located in Ngamplangsari Village, Cilawu District, Garut Regency to inspect the construction process of low-cost apartment in the boarding school.

President Jokowi, Ibu Iriana, and the entourage will spend a night in Garut Regency before carrying on the working visit the day after.