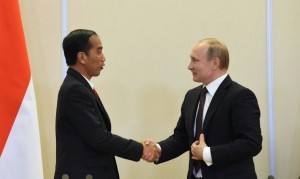 President Joko Jokowi Widodo and Russian President Vladimir Putin are scheduled to hold a bilateral meeting on the sidelines of the ASEAN-Russia meeting in Singapore on November 13-15, which is part of the 33rd ASEAN Summit.

For the first time, President Putin will attend the ASEAN +1 meeting and has asked to meet with President Jokowi, said Director of ASEAN External Cooperation, Ministry of Foreign Affairs, Benny Siahaan, in Jakarta, Thursday (08/11).

In addition, ten ASEAN member countries and Russia are also expected to discuss the issue of increased cooperation in various fields, including cyber security and education, he added.

President Jokowi is scheduled to attend the ASEAN Summit in Singapore on 13-15 November and the APEC (Asia-Pacific Economic Cooperation) Summit in Port Moresby, Papua New Guinea on November 13-18.

During the working visit to Singapore, President Jokowi is also expected to attend other summits, such as ASEAN +1 and ASEAN +3, according to Indonesian Minister of Foreign Affairs Retno Marsudi. (ANT/ES)