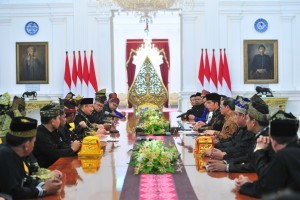 President Joko Jokowi Widodo will be awarded a traditional honorary title Datuk Sri Setia Amanah Negara, which means a dignitary, a mandate holder, and a prominent person who is radiant, by the Riau Malay Traditional Society (LAM Riau) on 15 December 2018.

The plan to grant the traditional honorary title was conveyed by the Liaison officer of the Malay Traditional Society Kapitra Ampera, when meeting with President Jokowi, at the Merdeka Palace, Jakarta, Tuesday (4/12).

On the occasion, Technical Chairman of the LAM Riau Datuk Syahril Abu Bakar explained that the title is going to be awarded to the President because he is successful in eliminating forest fires in Riau.

Syahril cited also other examples of the Governments achievement, such as the takeover of Rokan Block in Riau Province to be managed by Pertamina (state-owned oil and gas company), the issuance of the Presidential Regulation Number 86 of 2018 on the Land of Objects for Agrarian Reform (TORA), so that customary land is now recognized and certified, the issuance of the Presidential Instruction Number 8 of 2018 on the Restructuring of Palm Oil Plantations, and the management handover of Coastal Plains and Pekanbaru (CPP) Block to PT Bumi Siak Pusako, a company owned by the local government (previously managed by Pertamina).

In addition to proposing President Jokowi to accept the traditional honorary title, the LAM Riau also invited the President to attend declaration of national certification for indigenous communities and the distribution of 6,000 Land Objects for Agrarian Reform (TORA) certificates to the people of Riau, as well as a cultural parade which will be held on 15 December 2018.