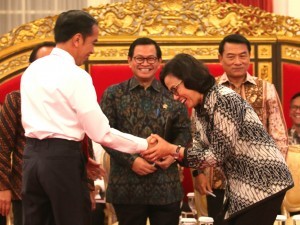 President Joko Jokowi Widodo appraises economic development momentum of which trend is increasing, from 5.06% in the third quarter of 2017 to 5.19 in the fourth quarter of 2017. The President hopes, this trend continues to improve in 2018.

Moreover, I learn our export progress; particularly commodities and coal sectors are significantly increased. Household consumption is also expected to go up in line with the running of Cash for Work Program in several regions, President Jokowi said in his directives during a Plenary Cabinet Meeting, at the State Palace, Jakarta, on Monday (12/2) afternoon.

The President also reminded us that investment and export are the key to further empower economic development. Therefore, the President asked us to continue improving Ease of Doing Business (EoDB) and investment climate in provinces, regional, and cities. This is what businessperson has been waiting for, he added.

According to the President, we are now in a race with other countries which also do the same thing. If we were late, we would left behind, and investment will shift to countries with a better climate. Whereas, the President further said, we need new job opportunities to overcome the existing unemployment.

Aside from investment, President Jokowi reminded us that export contributed 20.37 percent of PDB (Product Domestic Brutto). According the President, this should be broken by overcoming the obstacles faced by domestic exporters and involving businessperson and state owned enterprises to manage non-traditional export markets.

For it, the President has ordered Foreign Affairs Ministry to hold exhibitions in these non-traditional countries starting next year. In the early next year it should have been undertaken especially for a high populated countries, such as Pakistan, Bangladesh, or for example in Africa where it is high populated but also its economy develop significantly, the President further said while commanding to export more our commodities.