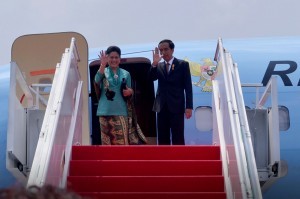 President Joko Jokowi Widodo is scheduled to visit South Korea on 10-11 September and Vietnam on 11-12 September, according to Spokesperson of Ministry of Foreign Affairs Armanatha Nasir in a press conference on Thursday (6/9).

The visit to South Korea will coincide with the 45th anniversary of Indonesia-South Korea diplomatic relation, Armanatha said, adding that the visit is the reciprocal visit after South Korean President visited Indonesia last year.

In Seoul, President Jokowi is scheduled to attend a bilateral talk with South Korean President Moon Jae-in, attend the Indonesia-South Korea business forum and business meeting, deliver a public lecture at Hankuk University, and meet with Indonesians living in Seoul.

Regarding the visit to Vietnam, Armanatha Nasir said that the President is scheduled to arrive in Hanoi on Monday (9/11) and will meet Vietnamese President Tr?n ??i Quang. Armanatha added that the visit aims to boost economic cooperation between the two countries and open market access between Indonesia and Vietnam.

According to Armanatha, Indonesia and Vietnam are the two countries with the first and third largest populations in ASEAN respectively, and the two countries also enjoy five percent economic growth in recent years which can open up opportunity for the cooperation. He added that there are several bilateral issues that will be discussed during the meeting between the two leaders, including accelerating the completion of the negotiations for the Exclusive Economic Zone (EEZ) of the two countries, boosting trade and investment, and reducing trade barriers between the two countries.

President Jokowi is also scheduled to be a panelist at the World Economic Forum (WEF) in Hanoi, Armanatha added.  (ANT/ES) (RI/EP/Naster)