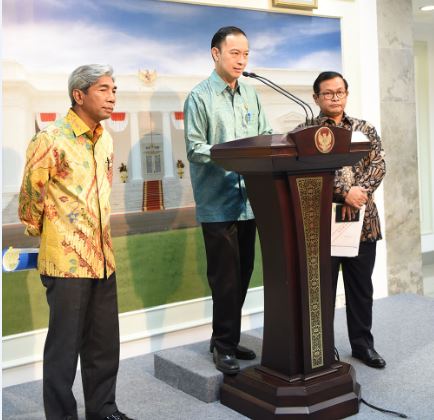 Head of BKPM explains the planned working visit of President Jokowi to Australia after a limited cabinet meeting at the Presidential Office on Tuesday (21/2). (Photo by: Public Relations Division/Deni)

Head of Investment Coordinating Board (BKPM) Thomas Lembong said that one of the main agenda of President Joko Jokowi Widodos working visit to Australia on 25-26 February is to discuss economic issues with the Australian Government, including the IA CEPA (Indonesia Australia Comprehensive Economic Partnership Agreement)  an investment and trade agreement.

Minister of Trade Enggartiasto Lukita and I reported (to the President) that the negotiations have been quite smooth so far. We do not see any barriers for the completion of the Agreement this year, Lembong said to reporters after a limited Cabinet Meeting at the Presidential Office on Tuesday (21/2).

Once those negotiations are completed, Thomas added, 2017 will be the first bilateral trade agreement between Indonesia and Australia in more than 10 years.

However, Thomas admitted that the Agreement would bring quite a big pressure for investment. Weve also reported that there has been an investment in the gold mining sector, he said.

Lembong added when he and Minister of Trade were in Australia for a working visit in November last year, a Memorandum of Understanding (MoU) was signed between Newcrest and state-run diversified miner PT Aneka Tambang (Antam), in which Newcrest budgeted more than US$1 billion for gold exploration in Indonesia for the next 5 years through cooperation with PT Antam.

So this is a real, concrete result of diplomacy of the President and the Governments Economic Team, Thomas concluded. (DNA/FID/RAH/ES)  (EP/YM/Naster)