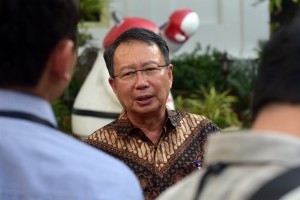 President Joko Jokowi Widodo, on Thursday (18/10), is scheduled to visit Lombok, West Nusa Tenggara province to monitor the disbursement of cash assistance to the victims of the quake that hit Lombok Island at the end of July.

The President wants to make sure that everything is going as planned, Head of the National Disaster Mitigation Agency (BNPB) Willem Rampangilei said after attending a Plenary Cabinet Meeting at the State Palace, Jakarta, Tuesday (16/10).

According to Willem, the Government has cut procedures for the disbursement. Previously, the beneficiaries need to provide 17 documents but the new procedure only needs one document without ignoring accountability aspect.

Therefore, the Head of the BNPB continued, the cash disbursement will be carried out through Community Groups (Pokmas) consisting of 10 to 15 people and the cash can be used to repair or even to build their damaged houses.

The Pokmas must be legalized by a Decree of the Regent and with that Decree, the appointed head of the Pokmas can collect the signature of members on authorization letter and come to the designated bank to disburse funds which amount is in accordance with the number of group members, Willem said.

Furthermore during the rehabilitation and reconstruction of quake-affected residents houses, the Pokmas will be assisted and supervised by TPM (Community Assistance Team) which consists of the Village Supervisory Non-Commissioned Officers (Babinsa), local police, and community leaders.

So far, continued the Head of BNPB, the Pokmas on four districts have been verified and there are three more districts to be verified on 20 October and 1 November 2018. If the verification is completed, the Decree of Regent will be issued in early November. With the results of the verification, we have a basis for channeling stimulant assistance funds to the affected residents, Willem said.

In the meantime, reflecting on the two disasters that hit Lombok and Palu, President Jokowi has ordered Coordinating Ministers to draw up standard operating procedure (SOP) on disaster handling and emergency responses. Willem admitted that if a disaster occurs, currently the Government will act based on the regulation of Head of BNPB on emergency response.

So, ministries and institutions know what to do and the emergency response time can be as short as possible, Willem said, adding that President Jokowi have appointed Coordinating Minister for Political, Legal and Security Affairs and Coordinating Minister for Human Development and Culture to lead the drawing up of the SOP. Law Number 24 of 2007 on Disaster Management will be used the legal basis to draw up the operating procedures. (RSF/RAH/ES) (GWH/MMB/Naster)