President Jokowi to Visit Lombok to Embark on Reconstruction Process 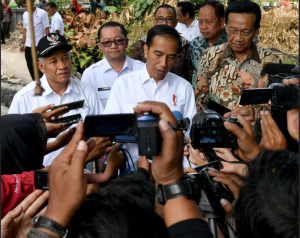 President Joko Jokowi Widodo is planning to visit Lombok, West Nusa Tenggara (NTB) province, to embark on and assist the reconstruction of residents houses damaged by the earthquake.

“God willing, I will go to Lombok this coming Saturday or Sunday to check the start of the reconstruction of houses,” the President said after inspecting the Village Fund development project, in Sendangtirto Village, Sleman Regency, Yogyakarta, Wednesday (29/8).

The President emphasized that the Government wants the rehabilitation and reconstruction process to take place and end as soon as possible.

With regard to infrastructure reconstruction affected by the earthquake, the President has ordered his ranks to complete it within six months.

The President underlined that the construction of houses for earthquake-affected victims would be carried out by adapting the Healthy Modest Instantaneous House (RISHA) design that has been tested for earthquake resistance. For this reason, the Government has sent hundreds of young engineers to assist residents in building more earthquake-resistance houses. (Bureau of Press, Media, & Information of Presidential Secretariat/ES) (MUR/MMB/YM/Naster).