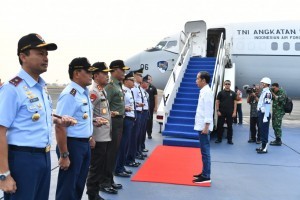 Using the Air Force Boeing 737-400 aircraft, the President and his entourage departed from the Halim Perdanakusuma Air Force Base, Jakarta, at 07:00 am Western Indonesian Time.

Deputy for Protocols, Press and Media of the Presidential Secretariat Bey Machmudin said that upon arrival at Mutiara SIS al-Jufri Airport, Palu, the President would immediately inspect a number of quake-and-tsunami-affected areas, starting from Petobo Village, Wirabuana Hospital, to Hotel Roa-Roa.

“The President will also inspect a number of quake-affected houses and also evacuation sites in Donggala Regency, Central Sulawesi Province,” Bey said in a press release on Wednesday (3/10).

For the record, this is the President’s second visit to the province, after the first on Sunday (30/9). According to Bey, through this visit, the President wanted to ensure the Government’s commitment and rapid movement in the post-quake-and-tsunami relief efforts.

The President and his entourage are scheduled to immediately return to Jakarta in the afternoon through the Helipad of the Donggala Regent’s Office and then change planes at Mutiara SIS Al-Jufri Airport, Palu, and continue the journey to Jakarta. (ES)(MUR/EP/YM/Naster).